4handsLA is L.A.’s “dazzlingly young” (Los Angeles Times) piano duo. Regular performers on the Jacaranda: Music on the Edge of Santa Monica series, the energetic duo of Steven Vanhauwaert and Danny Holt was introduced to audiences in 2009 in a performance of Stravinsky’s Rite of Spring. The Huffington Post wrote that the duo’s performance “created a sensation”, and LAOpus said of their Stravinsky performance: “The four-hand piano Sacre blazed like a comet through the hall. Both illuminating and liberating, one could only stand mute at the work’s astounding musical structure. Vanhauwaert and Holt tore into this piece like furies, undeterred by daunting challenges. It was a performance at turns propulsive and precise, aggressive and tender. What aplomb these two demonstrated!” 4handsLA was recently among seven finalists at the Liszt 2011 Chicago International Duo Piano Competition, and were Artists-in-Residence at the L.A. Musical Salon from 2013-2015.

The duo’s 2013 debut CD, Paris 1913, features their signature Stravinsky alongside other contemporaneous four-hand works from Paris by Ravel, Satie, and Poulenc. Their 2014 follow-up CD includes the rarely-heard piano four-hands version of Stravinsky’s Petrushka.

Vanhauwaert and Holt are also active soloists, having performed at Carnegie Hall, Walt Disney Concert Hall, the Concertgebouw, and other venues across the U.S., Europe, and Asia. Vanhauwaert was the Grand Prize winner of the 2004 Los Angeles International Liszt Competition and his recent tour of China culminated at the National Center of Performing Arts in Beijing. His recordings have been released on Sonarti Records, Bridge Records, and Éditions Hortus. Holt is a versatile performer known for championing contemporary works. His Fast Jump album (2009, Innova Recordings) received rave reviews from Gramophone magazine and has been heard on radio stations from coast to coast. Both Vanhauwaert and Holt were recently selected to be featured solo artists on the Piano Spheres Satellite Series in downtown Los Angeles.

“…breathtaking…a ballet of bodies and fingers working in perfect unison to spectacular ends.”

“The four-hand piano Sacre blazed like a comet through the hall. Both illuminating and liberating, one could only stand mute at the work’s astounding musical structure… Vanhauwaert and Holt tore into this piece like furies, undeterred by daunting challenges…It was a performance at turns propulsive and precise, aggressive and tender. What aplomb these two demonstrated!”

“Steven Vanhauwaert playing the upper half of the keyboard (most of the time) and Danny Holt performing at the piano’s Bass end, gave a tumultuous rock and roll performance that brought the house down. They made the piano rage, shout, sigh and cry with mystical longing…This stunning piano version of Stravinsky’s masterpiece, coming at the end of a long evening, was worth waiting for.”

“Joining forces, Vanhauwaert and Holt treated the audience to a performance of Satie’s provocative ‘Parade,’ an absurdist ballet originally created with Pablo Picasso and Jean Cocteau. In slapstick comedy argot, Satie (along with Holt and Vanhauwaert) took the powder and left the listeners holding the bag. Fortunately, the audience was amused. At intermission audience members couldn’t stop talking about the ‘Parade.’”

“Magnificent…this was a performance that had the same bite, mysteriousness, and raw primitivity that you’d want from the fully orchestrated version.  Messers. Holt and Vanhauwaert deftly managed all sorts of manual contortions and gymnastics to bring the work to life, all while drawing a wide array of textures and timbres out of the single grand piano. When it was done, the ovation they received was easily the loudest and most sustained of the evening.”

“Two Liszt symphonic poems–‘Les Preludes’ and ‘The Battle of the Huns’–were given in versions for two pianos. This served double duty, showing Liszt’s wildly inventive approach to programmatic music while allowing two dazzlingly young pianists–Steven Vanhauwaert and Danny Holt–to exhibit something of Liszt’s flamboyant keyboard side…There is certainly nothing soft about Liszt’s two-piano versions of his tone poems. I missed orchestral color in ‘Les Preludes,’ a famous piece, and orchestral power in ‘Battle of the Huns,’ a more obscure one. But what fun the compensating virtuosity of Vanhauwaert and Holt.”

“Two years ago the duo-pianist team of Steven Vanhauwaert and Danny Holt created a sensation at Jacaranda in their four-hand version of Stravinsky’s Rite of Spring. They returned here with a grand piano each in a yin-yang configuration for the two tone poems, joined by Mark Alan Hilt on the organ for the latter of the two. All three performed impressively.” 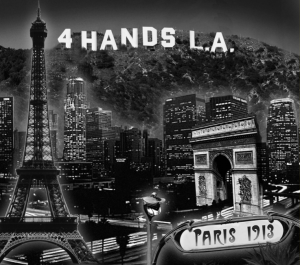 A riveting new recording of the piano four-hands version of Stravinsky’s “Rite of Spring” and works by Ravel, Poulenc, and Satie. 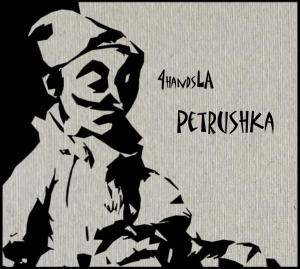 In this follow-up disc to the Paris 1913 album, 4handsLA recorded Stravinsky’s iconic Petrushka, along with Casella’s Puppazetti, which is also centered around the idea of puppets.